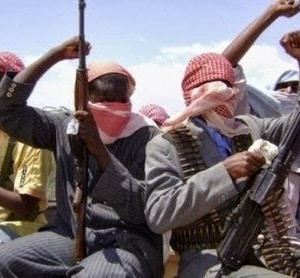 The attack in Gombe state came just after midday and began with a gunfight at a military checkpoint on the outskirts of Nafada town.

“They came in large numbers in vans and on motorcycles, shouting Allahu Akbar (God is greater),” said resident Abubakar Galda, in an account supported by other locals and a rescue worker.

Galda said the gunmen overpowered the military and police guarding a checkpoint on the main road and then moved into the town.

Nafada is near the border with Yobe, a state under emergency rule since last year because of the Islamist uprising and where Boko Haram is believed to control several towns and villages.

Police in Gombe were not immediately available for comment.
If confirmed as a Boko Haram attack, the violence would be consistent with pathetic sect’s recent pattern of striking south of their stronghold in the extreme northeast.

Inside Nafada the gunmen “blew up a police station with rocket propelled grenades”, said Galda.

Another resident, Awwalu Ibrahim, said they then razed the local headquarters of the country’s ruling Peoples Democratic Party.

The group is thought to be funding its insurgency increasingly through theft and ransom kidnappings.

The violence comes after a triple bombing at a bus station in the state capital Gombe City last week, which killed at least eight people and injured dozens of others.

Bloodshed has continued across the north since the government claimed on October 17 that Boko Haram had agreed to a ceasefire.

Nigeria maintains that the truce is still viable, despite the continued violence and mounting death toll.

But most experts believe that the purported Boko Haram envoys supposedly in talks with the government have no ties to the group’s real leadership.

Boko Haram leader Abubakar Shekau dismissed talk of a ceasefire as “a lie” in a video sent to AFP last week.