Crimea is voting on whether to rejoin Russia or stay with Ukraine but with more autonomy. The referendum has been condemned as “illegal” by Kiev and the West but is backed by Moscow.

Since the fall of Ukraine’s pro-Moscow President Viktor Yanukovych, Russian troops have in effect taken control of the majority ethnic-Russian region.

Voters are expected to support leaving Ukraine, but Crimean Tatars are boycotting the poll.

There are reports of a high turnout at polling stations visited by the BBC in the capital, Simferopol, and mainly Tartar Bakhchisaray. But all Tartars spoken to by the BBC in Bakhchisaray said they would not vote.

Election official Mykhaylo Malyshev said there had been a “record-breaking turnout” of 44.27 per cent, after six hours of voting. 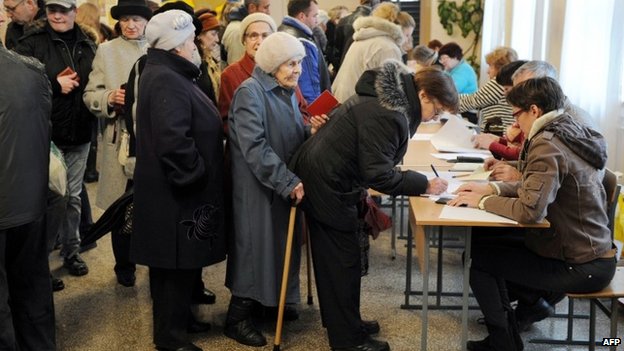 On the ballot paper, voters are being asked whether they would like Crimea to rejoin Russia.

A second question asks whether Ukraine should return to its status under the 1992 constitution, which would give the region much greater autonomy.

Some 1.5m voters are eligible to cast their ballots, and the first results are expected to be released shortly after the referendum.