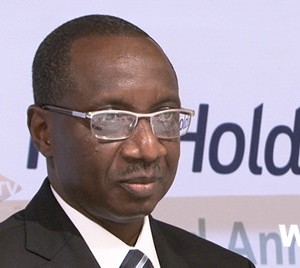 FBN Holdings Plc has posted a gross earning of N333.2 billion, representing a 12.5 per cent year-on-year increase for nine months ended September 30, from N296.3 billion recorded in the same period of 2013.

According to the results released on Wednesday, FBN Holdings posted a 2.4 per cent increase in net interest income of N176.5 billion as against N172.4 billion recorded in 2013, while non-interest income went up by 35.5 per cent year-on-year from N52.7 billion in 2013 to N71.4 billion.

Commenting on the results, Bello Maccido, Chief Executive Officer of FBN Holdings said that “Despite the tough operating environment, FBN Holdings continues to deliver a resilient level of profitability, with profit before tax of N73.7 billion, which represents an increase of 5.2 per cent year-on-year. Gross earnings also increased by 12.5 per cent year-on-year to N333.2 billion.

“We remain committed to enhancing shareholder returns by ensuring improved contribution from our subsidiaries and leveraging on opportunities across the Group to drive revenue generation, particularly in non-interest income.

“We will continue to drive efficiencies across our businesses through a number of cost-containment programmes and expect improvement on this front in the short to medium term.

Furthermore, we remain focused and confident on ensuring the businesses remain well-funded and adequately capitalised to support our growth initiatives.”

The Group, according to its financial report, is driving increased business generation and enhancement of non-interest revenue. through such initiatives like reviewing the its operating model in line with the evolving business environment to ensure strategic realignment and optimal use of available resources.

The Group is also increasing focus on banking the value chain within the public sector and the institutional banking space, as well as increasing its focus on transaction banking services to stimulate improved collections; grow low-cost deposits; and, retain funds through offering effective e-Payment and liquidity management solutions.

Others include enhancing cross sell initiatives and driving improved performance and returns from other subsidiaries to provide diversified and sustainable revenue for the Group and creating an integrated middle office to boost the productivity of relationship managers through a sustainable engagement that engenders excellent customer service experience that drive repeat sales.

Commenting on the results for the Commercial Banking Group, GMD/CEO of First Bank of Nigeria Limited, Bisi Onasanya said that “The Commercial Banking Business group recorded profit before tax of N74.3 billion (Sept 2013: N67.7 billion), representing an increase of 9.7%.

“In response to the business environment, we have implemented a refined Bank operating model to take advantage of the increasing growth opportunities in retail banking, as well as, ensuring optimal utilisation of resources. This has led to the creation of Lagos & West and South Regions from the former Retail Banking South and Public Sector South Directorates effective August 1, 2014.

“We will continue to challenge ourselves in identifying innovative ways to serve our customers in an environment that provides commendable customer experience and encourages repeat sales. We have also realigned our front-back office workforce ratio in favour of front office to enhance customer’ touch-points and deepen revenue generation capabilities.”

“The number of debit cards in issuance continues to increase with the Bank’s debit card base for nine million in 2014 at 8.4 million, of which 7.1 million were Verve cards and 1.1 million Naira MasterCards. We have sustained the increase in our market share of Verve cards which is now at 39 per cent, with an activity rate at 88 per cent. Revenue from the card business continues to see improved growth, up 104% per cent y-o-y to close at N4.5 billion.”

“We have a total of 2,554 ATMs (+117 in 2014) deployed across the country to ensure proximity to serve our customers and encourage the use of alternative channels to deepen our service. The ATM migration rate remained at 90% indicating continued success in migrating to low cost channels. The volume of cash dispensed (to both FirstBank customers and other banks customers) at the ATM continues to grow at N540 billion (+27.8% y-o-y, 3.5% q-o-q) in 31.7 million transactions.

“We have maintained impressive growth in the usage of our internet banking as well as mobile banking platforms. Online Banking in FirstBank has now been integrated with PayPal servers to enable customers to open PayPal accounts within their Online Banking profile, to link their MasterCard/Visa Card(s) to the account and to enable payments online without necessarily opening and verifying PayPal accounts directly on the PayPal domain. Though in its very early stages, we are beginning to witness a good number of customers enrol for this service thereby supporting revenue from internet banking solutions.

The portfolio of earning assets increased by 13 per cent y-o-y to N652.5 billion and more profitable assets mix was achieved in the review period. Funding and liquidity positions have been strong throughout the period as the Bank continued to attract deposits from different sources, while the capital resource is adequate to support increased lending activities.

Profit before tax increased by 15.9 per cent to N6.4 billion while total assets grew by 19.9 per cent y-t-d to N642.4 billion; driven by customer deposits growth of 28.5 per cent y-t-d to N380.1 billion across both retail and wholesale deposits which provides a well-diversified funding base. Loans and advances to customers closed y-t-d at N329.7 billion driven by oil and gas, general commerce sectors.

In the Democratic Republic of Congo, BIC’s gross earnings increased by 28.0 per cent y-o-y to N7.3 billion with profit before tax up by 19.0 per cent to N1.5 billion. BIC has sustained its position as one the top three banks in terms of pre-tax profit.

The Company now has N2 trillion in assets under custody in July 2014. This was achieved by the addition of about N0.51 trillion non-proprietary assets to the Company’s portfolio, driven by the CBN directive that all Deposit Money Banks and Discount Houses should appoint a licensed custodian and outsource their non-proprietary assets. FPCNL’s balance sheet size grew 8.6% y-t-d to N6.9 billion (Dec 2013: N6.3 billion). The growth is attributable to improved operational performance resulting in increase in earning assets for the year under review.

The five West African subsidiaries of ICB West Africa, i.e. ICB Ghana, ICB Gambia, ICB Guinea, ICB Sierra Leone and ICB Senegal are undergoing integration into the FirstBank structure. We are progressing on the integration of the name change and rebranding of the subsidiaries.

In Ghana, branch upgrades and the rebranding event have been completed. Sierra Leone has finalised the name change and is now known as FBNBank (Sierra Leone) Ltd. Other locations are at different stages of progress with name change and branch upgrades. These subsidiaries offer a number of financial services and products to customers comprising retail, corporate, SMEs and the public sector

The total assets of the ICB West Africa banking operations was N44.6 billion (1.0% of the banking group) an 18.3% growth from N37.7 billion in Dec 2013. These assets generated gross earnings of N4.3 billion and returning a profit before tax of N1.1 billion.

Performance at the end of the third quarter was primarily driven by the Investment banking, Asset management & Trust businesses, collectively contributing 67% of net revenues. Transactions in oil and gas drove the investment banking performance across structured finance and syndicated loan market activities.

The Insurance Business Group offers insurance brokerage and composite underwriting services to customers; while FBN Insurance Brokers (100% owned subsidiary) provides the brokerage service, the full underwriting business is provided through FBN Insurance (65% owned by FBNH and 35% by Sanlam). Revenue for the Insurance group increased by 67.7% y-o-y to N4.6 billion from N2.7 billion, while profit before tax rose to N902.2 million, up 68.5% y-o-y from N535.5 million in Sept 2013.

In addition, a retail focused strategy has been adopted towards the mass market where insurance penetration is at its lowest supported by increased distribution channels. We expect improved contribution and market share as we fully integrate the general insurance business. Total assets of the business increased by 37.2% y-t-d to N17.8 billion (Dec 2013: N13.0 billion).