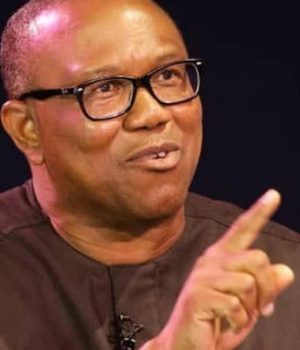 The Peter Obi Presidential Global Network (PPGN) on Thursday congratulated Mr Peter Obi for emerging as the presidential candidate of the Labour Party (LP) ahead of the 2023 presidential election.

A statement by PPGN Head of Press, Asa Blessing Chijekwu, quoted Dr Michael Chukwujekwu, Global Coordinator of the group from his base in UK, as saying that Obi’s emergence was the first step towards rescuing the country from its challenges.

It would be recalled that Obi emerged as LP presidential candidate after Prof. Pat Utomi and two others stepped down for him to clinch the party’s ticket for the 2023 presidential election.

Obi polled 97 votes out of 98 total votes cast to emerge winner of the presidential primary during the national convention of LP held in Asaba, Delta, on May 30.

Chukwujekwu commended Obi for resigning from the Peoples Democratic Party (PDP) where his ambition could have been stifled and joining Labour Party to actualise his ambition and plan of rescuing the country.

He said PPGN as a global formidable movement that has chapters in all the states, local governments and wards of Nigeria as well as Europe, American, South and Northern America, Canada and Australia, would support Obi’s presidential journey.

“We request Nigerians at home and in the Diaspora to support and embark on this journey with Mr Peter Obi till he becomes the elected president of Nigeria to rescue the nation, God willing”.

Chukwujekwu added that most Nigerians abroad were united in rescuing Nigeria through a valid electoral process in 2023 and beyond, by ensuring that the electoral choice of the masses stands.

Chief Pat Okpala, Coordinator for American Region comprising of North and South America as well as Canada assured that the American region of the group would ensure that the choice of Nigerians and masses were not compromised during election.

“We are watching the Nigerian opinion poll and all the presidential aspirants from respective parties. However, we will join Nigerians to rescue Nigeria by delivering the most suitable candidate throughout the popular opinion poll result and general election process against all odds”.

The PPGN was inaugurated on April 24 to galvanise support for the presidential ambition of Mr Peter Obi, as he is seen as a candidate with antecedent in the area of productivity, education, research, governance and management of the economy. (NAN)

UK to Cut Taxes on Imports from Developing Countries