One of the reported kidnap victims in Enugu last Thursday has been found by the operatives of the anti kidnap team of the Enugu Police command.

According to the police spokesman, Superintendent Ebere Amaraizu, the ‘victim’ Kosisochukwu Anioma confessed that she was never kidnapped but faked it in order to meet her school’s boyfriend in Owerri.

Until the time of filing this report, Kosisochukwu, who is a daughter of an Enugu politician and a former aide to former Governor Chimaroke Nnamani, Frank Anioma was still in custody of the police.

Anioma had reported on Thursday that his daughter, Kosiso was on her way to the New Haven market when she got missing.

“Her phone was ringing when we called her number but there was no reply. Thereafter, it went into busy,” Anioma posted.

The police based on the report immediately swung into action where she was traced to Owerri in Imo state.

According to Amaraizu, the teenage girl confessed: “I faked kidnap in order for me to travel to Owerri to meet my school boyfriend.” 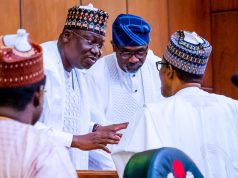 Buhari to reconstitute NDDC board

Buhari to reconstitute NDDC board