The presidential candidate of the opposition Peoples Democratic Party, spoke in Osogbo while addressing a presidential rally of the party held at Nelson Mandela Freedom Park, Osogbo.

Atiku, who had earlier visited the Owa of Obokun of Ileshaland, Oba Gabriel Aromolaran and the Ooni of Ife, Oba Adeyeye Ogunwusi, in their palaces, said President Mohammadu Buhari, failed all the promises made before his election in 2015, and deserved to be voted out.

“They said they were going to secure our country, instead of securing our country, we have insecurity in three to four zones of the country. Have they delivered on all these three? Why should you then vote for them?

“Now, listen to this very carefully, we have information that INEC has been givig uncollected PVCs to the APC governors. So if a voter comes to your polling booths and you don’t know him, don’t allow him to vote because they want to steal your votes.

Speaking earlier, the PDP National Chairman, Prince Uche Secondus, said Atiku was tested and would deliver if given opportunity to revive the fortunes of the country.

In their separate remarks, the Osun PDP Chairman, Soji Adagunodo, former Ogun and Ekiti state governors, Gbenga Daniel and Ayo Fayose respectively, called on the electorate to vote for Atiku to save the country from further misrule. 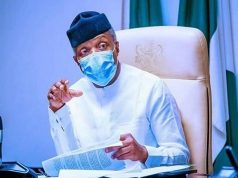