Current affairs magazine Newsweek has relaunched its print edition. The move comes just months after the US magazine was bought by digital news company IBT Media.

Newsweek discontinued its print edition in December 2012 after 80 years, amid falling advertising revenues as readers moved towards online publications.

However, the new owners say they have worked out a business model that does not rely heavily on ad revenue.

Etienne Uzac, co-founder and chief executive of IBT Media, says the company aims to generate as much as 90% of the income for its print edition from subscription revenue.

It has put a premium price on the print edition, which will be sold for $8 (£5) per copy in the US, to ensure profitability.

Uzac says that over the past few years, advertising revenues at print magazines dropped far more than their circulation.

He says this is a key reason why many magazines, which traditionally relied heavily on advertising revenue, faced difficulties in sustaining their operations.

“They had low subscription prices, but they still had to produce and distribute those copies on a weekly basis, and that costs a lot of money,” he says.

“Now that money – not all of it, but a lot of it – is gone, but they still have the same pricing model. I think that is the problem.”

He says that Newsweek’s ceasing publication of the print edition in 2012 is in “some ways a mixed blessing” that may help it avoid those pressures.

“We were able to come back and reinvent the Newsweek print experience from ground up,” he says.

“We are not going after the multimillion reader base numbers that our competitors are going after. We are going for a more premium and profitable user base.

“It is difficult for others to get out of where they are, because they have subscribers that are five years or 10 years on file. You can’t do anything about that.”

At its peak, it had a circulation of three million. But, like many of its peers, declining readership and advertising revenue led to large losses in recent years.

The magazine was sold by former owner the Washington Post for $1 to US businessman Sidney Harman in 2010.

It was then merged with Mr Harman’s web magazine, the Daily Beast, before being sold to IBT last year for an undisclosed amount. 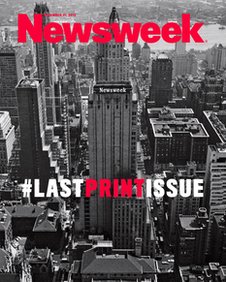 The move to relaunch its print edition comes as a surprise, not least because IBT has traditionally been a digital media company.

However, some industry watchers suggest that while digital advertising revenues have risen, they have not grown as fast as companies had expected and as a result some were now looking to offer print editions to attract more advertisers.

“Digital advertising has just not come close to compensating for what news magazines similar to newspapers have lost,” says Bill Grueskin, dean of academic affairs at Columbia University’s Graduate School of Journalism.

“There is still some value in print glossy advertising.”

He adds that if Newsweek’s print edition can “start to get some traction on that, it can be a modest success”.

Uzac admits that attracting potential advertisers was one of the key factors behind the move to restart the print edition.

“We could definitely charge more for print product, we felt, than for online,” he says.