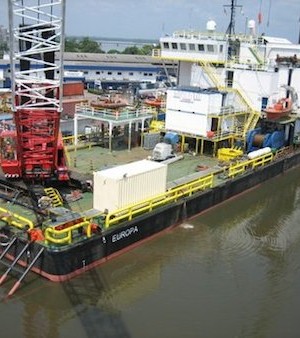 Nigeria is demanding a probe into the activities of a company, which it believes is involved in laundering stolen crude to Europe.

Wall Street Journal (WSJ), a US-based newspaper which levelled the allegations, said Saltpond Offshore Producing Company (SOPC) is suspected of being used to tranship and smuggle stolen Nigerian crude to Europe and that Washington is probing the company as part of a broader inquiry into how Nigerian oil gets stolen and laundered.

Sources within the intelligence community in Ghana told a local publication The Finder, that Nigeria is not happy that Ghana has not ordered official investigations into the accusation when it was published.

Consequently, investigative bodies in Nigeria have officially written to their Ghanaian counterparts to investigate the allegations levelled against Saltpond Offshore Producing Company.

The US for the first time failed to import a single barrel of crude oil from Nigeria in July 2014.

This troubling scenario, according to industry watchers, would not augur well for the Nigerian economy, which is highly dependent on revenue from oil.

Nigeria, Africa’s biggest crude exporter, depends largely on crude proceeds to service over 85 per cent of its budget.

Nigeria used to be the fifth largest exporter of crude oil to the US.

While US crude imports rose by 569,000 barrels per day in July, imports of Nigerian crude fell to zero for the first time.

Data obtained from the US Energy Information Administration showed that US imports rose to 7.623 million bpd, up from 7.054 million bpd, in June.

But imports from Nigeria fell to zero in July, down from 89,000 bpd in June, all of which had gone to the US Atlantic Coast.

Reports indicated that before July, the US has reduced crude imports from Nigeria by 91%, putting the country’s crude exports in disarray.

The US, which was hitherto the biggest importer of crude from Nigeria with over one million barrels per day, early this year imported an average of 100,000 bpd till June 2014.

Data obtained from the Nigerian National Petroleum Corporation (NNPC) revealed that by the end of last year, the US dropped to the 10th highest importer of Nigeria’s crude, with 1.438 million barrels down by 15.111 million barrels in December 2012.

The accusation was that small vessels that have loaded “unofficial” oil in Nigeria’s oil-rich Niger Delta frequently come to discharge at Saltpond. There, the Nigerian crude is mixed with Ghanaian oil. It comes from Nigeria, but it gets a certificate of Ghana origin.

The oil is then transferred to larger tankers for transhipment to Europe.

The provenance of the other oil that made its way to an Italian refinery over the course of the past year, however, is not clear.

Three cargoes, listed in shipping documents as “Saltpond blend crude oil,” went to Genoa’s terminal for delivery to Italy’s Iplom SpA refinery, according to shipping and port records and officials.

The WSJ reported that two cargoes, unloaded in August 2013 and February 2014, carried about 340,000 barrels altogether, according to Genoa port officials.

The third tanker, unloaded in April of this year, carried 132,000 barrels. Together, that’s more than four times the platform’s 2013 output of around 100,000 barrels, according to the Ghana government’s figures.

Giorgio Profumo, Iplom’s president, confirmed to WSJ that his refinery had received crude labelled as coming from Saltpond, but said he believes the cargoes were legitimate because they are approved by the Ghana authorities.

Saltpond platform was inaugurated in 1978 to pump oil from an offshore field. In its heyday, the field, located seven miles off the country’s coast, produced more than a million barrels a year. That has dwindled to just over 100,000 barrels over the course of 2013.

But since last August, three tankers picked up more than 470,000 barrels from Saltpond, transporting it to an Italian refinery near the port of Genoa, according to port officials, ship-tracking services and port records, reports the WSJ.

Some US and Nigerian officials suspect Saltpond is one of several destinations that smugglers use to tranship stolen Nigerian crude, effectively laundering it by making it appear to come from a legitimate source outside of Nigeria, says the US newspaper.