The Commissioner for Youths and Sports in Akwa Ibom, Monday Uko, has said that the State Government would inaugurate a 30,000 capacity Olympic-size stadium in September.

Uko who made the disclosure while defending the ministry’s 2014 budget in Uyo on Tuesday, said that the stadium was about 60 per cent completed; adding work was in top gear to meet the deadline.

“The 30,000 capacity Olympic-size stadium will be inaugurated by September this year. As at today, the stadium is at 60 per cent completion and the first match will be played in the stadium by October’’, he said.

The commissioner said that Uyo Township Stadium would be renovated soon for use by Akwa United and Ibom Angels.

He disclosed that a committee had been set up to discover talents from the secondary schools across the state for youth competitions.

Uko said that “Schools will be the focus of coaches across the eight sports zones in the state to harness talents for future competition.

“School sports will be revived to prepare the state for future competitions. School sport is the baby nursery where talents are discovered and we have to catch them young and secondary schools boys and girls will be our target.”

The commissioner requested for adequate budget provision for the ministry to provide skill acquisition training centre to the youths. 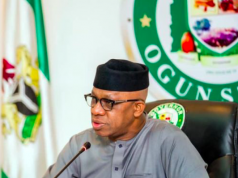