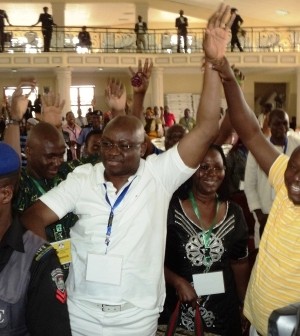 For the second time in four days, mob besieged the Ekiti State High Court, the venue of the Governorship Election Petition Tribunal, on Thursday threatening fire and brimstone.

They reportedly attacked a sitting judge, Justice John Adeyeye, beating him up and tearing his suit into shreds.

It was also learnt that the court record book of the Chief Judge, Justice Ayodeji Daramola, was also torn into pieces by the political thugs who also invaded and disrupted proceedings at the Election Petition Tribunal within the High Court premises in Ado-Ekiti.

The situation forced Justice Daramola to order the immediate closure of all the State High Courts.

The Chief Registrar of the court, Obafemi Fasanmi, in a statement in Ado-Ekiti said the closure followed the increasing concern over the spate of attacks by political thugs and their persistent presence at the premises of the Court in the past few days.

The Attorney General and Commissioner for Justice, Wale Fapohunda, alleged that those who carried out the act did it on the order of the Governor-elect, Ayo Fayose, of the Peoples Democratic Party, whom he accused of going round the court premises with large number of supporters.

Fapohunda said Justice Adeyeye, who was presiding over a case had accosted Fayose and advised him to desist from moving around with machete-wielding thugs, causing disruption of proceedings, which he said led to exchange of hot words between the duo, resulting in the manhandling of the Judge.

But Fayose, who spoke with journalists in Ado Ekiti, denied the allegation, describing it as not only unfounded, but spurious.

“I am not aware that a judge was beaten. In fact, this is strange to me. Though, I visited the Election Petition Tribunal as a party to the case and I was the only one that was allowed passage by security to the Tribunal. And to the best of my knowledge, the three judges handling the Tribunal case actually seated.

“How can I order the people to beat up a Judge that has nothing to do with me? At what point was this Judge beaten? Was he a member of the Tribunal? Because I went to the Tribunal and not the regular Court.

“But I want to point out that a situation whereby Judges or judicial officers , who should be custodian of the law got compromised with politicians, then anarchy sets in. The Judge handling the suit against my qualification dropped the case because of tension and because he lacks the confidence to continue.

“It would have been better for him to insist that he would try the case based on its merit. It is sad that most of our judges have compromised.

“If you have been defeated in all the 16 Local Governments and you now want to come through the window, it won’t be like ice cream party to APC. I would not be too cheap like Segun Oni. I am not going to be cheap at all because I am elected by the people.

“I don’t care about whatever they write about me because I have grown a thick skin. The strategy of APC will not work. Nobody, no matter how highly placed would remove me cheaply.”

Fasanmi lamented that another set of political thugs in their hundreds invaded the court premises again on Thursday and assaulted Justice Adeyeye of the High Court 3 in Ado-Ekiti by beating him up and tearing his suit into shreds.”

Indicting the Police for their lackluster role, he said, “The police officers on guard looked unconcerned and disinterested as Judges, Magistrates and other members of staff had to run for their dear lives, while courts properties were either damaged or completely destroyed.

Fasanmi said the courts would remain shut until adequate and effective security of our judges, Magistrates, members of the bar, members of staff of the judiciary and other court users was assured and put in place.

The protesters comprising motorcycle riders popularly called Okada riders and artisans became unruly during the hearing of the petition filed by the All Progressives Congress against the June 21 victory of the Fayose.

As soon as the three-man panel chaired by Justice Muhammad Sirajo rose to write a ruling on the schedule order, the crowd got out of control and started hurling stones on the APC lead counsel, Rotimi Akeredolu (SAN).

The presence of armed policemen, operatives of State Security Service, and armoured personnel carrier did not deter them.
Holding branches of a tree, the surging crowd pointed fingers at other lawyers representing the APC with a threat to deal with them when they come out.

Efforts by Fayose, who was at the tribunal, to control the mob failed.

When he noticed the crowd was charging towards the court with the police deployed in the court becoming overwhelmed, Fayose moved out to talk to the people but only got their attention for a while after which they returned and continued their agitation.

Shouting different unprintable names against Akeredolu and other APC lawyers, they attempted to gain entrance through the window, while they continued to throw objects into the court room.

The arrival of the Ekiti State Commissioner of Police, Taiwo Lakanu, however, brought the situation under control.

The court following a motion by Akeredolu commended Lakanu for bringing the situation under control, urging him to keep up the good work.

The Police boss who came with a reinforced team and escort vehicles dispersed the crowd by firing canisters of teargas.

This further infuriated the mob as they threw back the canisters at the Police. But they later caved in to persistent pressure from the Police.

There was a little apprehension in the court when one of the fired canisters shattered the windscreen of a Toyota Camry car belonging to a member of the tribunal marked Abia, ABSJ 62. People almost rushed out of the court thinking the car had caught fire with the gas escaping into the court room.

Justice Sirajo who was shocked by the incident said, “All of us are Nigerians. We know ourselves well. We will do what we have taken oath to do. Once in a while, we experience this draw back. For those affected, I’m sorry.”

Lakanu supervised the evacuation of the tribunal judges and the lawyers with a promise to lead them out of town.

In an interview with journalists, the Police boss said, “Actually it was rowdy, I had to leave my office and we have cleared everybody. The judges are happy and we are going to escort them out of town.

Referring to Monday attack on Justice Olusegun Ogunyemi who is handling a case on the eligibility of Fayose, he said, “You can see that the court is very porous, they came in torrents. We tried to save the lives of the judge first, nobody was injured; the judge was protected and we even effected arrest.

“They were too many, and of course politicians are allowed to go about with their supporters. Initially they were peaceful, but when we discovered they were getting rowdy, we had to react. I will personally lead the team that will lead the judges and lawyers out of town. We are more than ready, we are in charge.”

Earlier, the tribunal before adjourning till October 14 for hearing ordered the Independent National Electoral Commission to provide enabling environment parties in the matter to inspect electoral materials.

It refused the decision of the commission to reduce the number of people allowed for each of the parties to four.

The tribunal said its ruling on the subject provided no limit on the number of experts that can be brought for inspection.

Buhari sued by SERAP over unlawful pipelines and oil theft