Lagos State Government on Monday declared its readiness to boost the capacity of Private Sector Participation (PSP) waste operators in the state through the provision of equipment to increase their capacity with soft loans.

The Commissioner for the Environment and Water Resources, Tunji Bello while addressing the management staffers when he resumed for work at the ministry’s headquarters, Alausa.

According to Bello, the Governor, Babajide Sanwo- Olu is committed to providing capacity to the PSP operators in the state towards ensuring that they partner the state in carting away generated refuse.

He said part of the policy thrust of the present administration is to engage in waste sorting and buy back towards reducing the amount of waste generated and transported to the only functional dump site at Olusosun.

The commissioner said in the coming weeks, he would be meeting with leaders of market men, women, parks and garages on how to ensure that the parks and markets are always clean and do not dump waste indiscriminately.

He emphasized that there is a zero tolerance for indiscriminate dumping of refuse in all markets and parks, warning that the present administration will not hesitate to shut down any market or park that fails to engage the service of a PSP to properly dispose of its refuse.

He said with the renaming of the ministry as ministry of the environment and water resources which also includes drainage services, there would be concerted efforts to ensure that the drains are cleared all year round and refuse disposed adequately.

He also hinted of plans by the Sanwo-Olu administration to revive in conjunction with the Ogun State Government and the World Bank a plan that was mooted five years ago to establish another landfill site in Ogun State which is a contiguous State to Lagos.

He stated that in about four to five years time the only functional landfill site in the state which is at Olusosun will be filled up and that there is a need to take advantage of a neighboring state with landmass like Ogun State in preparing for any eventuality.

He affirmed that the bulk of the work of the ministry will be devoted towards refuse clearing as well as ensuring a smooth running of the drainage systems adding that uncleared refuse majorly contribute to clogging which eventually results to flooding in the state.

He said there was an immediate need to open up the manholes for cleaning so as to compliment the clean-up of primary and secondary drainage channels and called for the support of all members of staff, asking that all hands must be on deck to achieve a cleaner, healthier and flood free Lagos.

COVID-19 in Nigeria: Time to adopt the Lagos strategy nationwide, By Adegbenro Adebanjo 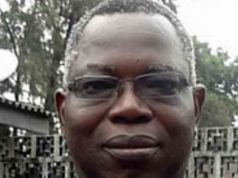 Mailafia on northern gov leading Boko Haram, says ‘I got my information from traders’

COVID-19 in Nigeria: Time to adopt the Lagos strategy nationwide, By Adegbenro Adebanjo