Robert Lewandowski scored a hat-trick as Borussia Dortmund came from behind to hammer Stuttgart and go top of the Bundesliga table.

Karim Haggui headed the visitors into the lead but Sokratis Papastathopoulos scored an equaliser with a header.

Marco Reus fired them ahead and set up Lewandowski’s opener with a backheel.

Lewandowski scored a second from Henrikh Mkhitaryan’s ball and tapped home for his hat-trick before Pierre-Emerick Aubameyang sealed the rout.

Poland striker Lewandowski assisted Aubameyang’s chip and even tried to head the ball in for a fourth but it had already crossed the line.

The 25-year-old, who has said he will leave Dortmund next year when his contract expires, has now scored 12 goals in 14 games this season.

They are two points clear of Bayern Munich, who visit Hoffenheim on Saturday, while Stuttgart drop to ninth in the table.

Dortmund host Arsenal in the Champions League on Wednesday and were able to bring off Reus and Mkhitaryan in the second half with the game already won. 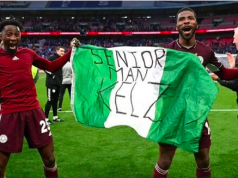