Olasupo Shasore, former attorney-general of Lagos state, says places of public significance should not be named after Frederick Lugard, first governor-general of Nigeria.

Discussing culture, identity and history on Art for the People, a programme anchored by Molara Wood, Shasore said Lugard’s place in history is not one to be celebrated.

Lugard is behind the amalgamation of the northern and southern protectorates in 1914 which led to the formation of the Nigerian nation.

The Kogi state government house is named Lord Lugard House, but Shasore said while his name needs to preserved for historical purposes, he should not be given prominence.

“He was a despicable character. I’m a Nigerian. I feel the pain of the consequences of many things he did. He was blood thirsty, over ambitious, a racist, segregationist,” Shasore said.

“He’s not even now placed in his proper position either in British or Nigerian history. I think that needs to change. We need to see him for who he really was. So, places like Kogi state house and Kaduna… we shouldn’t be naming monuments after Lord Lugard.

“I’m not saying take his name out of the streets because we need to have his name in our history but places of public significance and democratic relevance shouldn’t be named after him. You can’t have the state house called Lugard House. I think that’s wrong.”

According to him, the statues should be in a museum, not a “place of reverence” and minted with the money of Nigerians.

“There is nothing wrong with keeping records of history, effigies and statues but not in a celebratory way of people who ought not to be celebrated in history. His statue belongs in a museum where there would be a description of what he did,” he said.

The senior advocate of Nigeria (SAN) and author further said it is high time Nigerians stopped complaining about how the Nigerian country came about and focus on making things work.

“The longer we bicker about the fact that we were forced together because nobody really wanted to be together, I mean, it doesn’t go very far. We got to make it work and it’s people that make it work,” he said.

“To bicker over how Nigeria came together is to display a lack of faith in the national project. It’s to ignore the power of an idea for nation building and it’s to not know the power of the people into making nations work.

“Something happened in our communal experience that made us diminish ourselves in world history and somebody convinced us that it was okay to just be some people who sold cocoa, timber and rubber. We need to be intentional about our history, we can’t be accidental about it because it is the power of the people.” 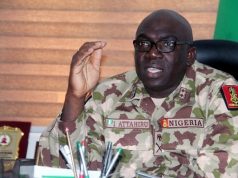 I was targeted for arrest with Sunday Igboho – Gani Adams