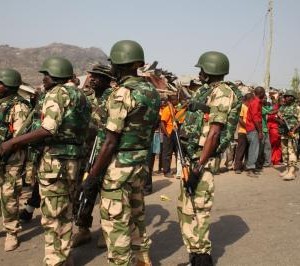 The Nigerian military has retaken Chibok, Borno State, where nearly 300 schoolgirls were abducted on April 14, from the extremist Boko Haram sect.

The terrorist sect had taken control of the troubled town on Thursday night but the spokesperson of the Army Division in Maiduguri, the Borno state capital, said the Army has retaken the town and driven the terrorist away.

“The military is still carrying out mopping up operations in the surrounding environment. Chibok town is now fully secured”.
Villagers around Chibok town said they saw a large deployment of soldiers moving in from the direction of Damboa towards Chibok on Saturday morning.

“We saw large number of trucks filled with uniformed personnel moving towards Chibok; initially, we were scared but later realised they were soldiers as they did not harass us like the Boko Haram gunmen usually do”, said a resident.

Boko Haram had seized several towns lately in Borno and Adamawa State, driving out government soldiers and other security operatives and confiscating their arms.

On Thursday, the Adamawa State governor, Bala Ngilari, said local vigilante and hunters, backed by the military, reclaimed Mubi, the second most important town in Adamawa, nearly two weeks after the town fell to the insurgents.

Chibok became the centre of international attention in April after Boko Haram fighters stormed the town and took away nearly 300 female students from a government secondary school.