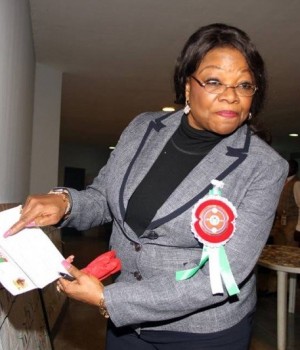 The State Security Services, SSS, says it had uncovered lists containing names and photographs of security personnel, foreigners and under-aged children on the registered members list of the All Progressive Congress, APC.

SSS spokesperson, Marilyn Ogar, who disclosed this on Wednesday at a news conference in Abuja, also said that a video with tutorial for hacking was also uncovered when the service raided a building in Lagos.

At the time, the agency said it acted on a tip-off. Later, Ogar said Nigerians would be shocked when presented with the findings of the raid.

At Wednesday’s briefing, Ogar said the agency “suspects” that the opposition party was working on an elaborate plan to illegally inflate the number of the members.

“We suspect that there was an elaborate and well-articulated plan to inflate the party’s membership data as well as hack into INEC’s voter registration database,” the spokesperson said.

According to her, this was done through the creation of the party’s membership forms and cards to match INEC’s voters register across the country, adding that the video of 21 hacking tutorials, “a temporary voter card, a permanent voter card’’ were also recovered.

“The tutorial video focused on the following areas: How to become a hacker and steps to take to avoid detection in the process of hacking web services.

Ogar also said that the tutorial clearly explained how to evade security of database such as “Intrusion Detection Systems (IDS), firewalls and other measures put in place to deter backers.”

She said the video also outlined ways to identify vulnerabilities in systems and how to cleverly drop a USB flash drive in a target establishment, alleging that the drive, when plugged into any computer, could transmit “malicious codes enough to gain access into and compromise the entire system of the target organisation.”

“The video explains how to hack into the systems of media houses with the aim of broadcasting fake stories or headlines,” she said.

Ogar said the service had written to the security agencies whose personnel were found on the APC register to investigate their involvement and take necessary actions.