The Supreme Court on Friday dismissed Celestine Omehia’s suit seeking to invalidate the re-election of Gov. Rotimi Amaechi of Rivers in April 2011.

The court upheld the appeal brought by Amaechi challenging the judgment of the Court of Appeal which granted leave to join Omehia in the case.

The appellate court had allowed Omehia, the candidate of the All Progressives Grand Alliance (APGA), to be joined in the appeal.

A Federal High Court in Abuja had in a judgment held that Amaechi’s first tenure ended on May 29, 2011, and ordered a fresh governorship election in Rivers in April 2011.

Justice Muhammad Muntaka-Coomassie, who delivered the lead judgment, held that the Court of Appeal in Abuja erred in law in granting Omehia leave to appeal against the judgment.

Muntaka-Coomassie held that the appellate court erred in joining Omehia in the suit even though he was not a party in the substantive suit that culminated to the appeal.

Earlier, Lateef Fagbemi, SAN, Amaechi’s counsel, told the court that Omehia was initially not a party to the proceedings in the lower court.

Fagbemi submitted that the appellate court ought not to have allowed Omehia to be joined in the matter as an interested party.

But Omehia’s Counsel, James Ezike, said that the appellate court decision was proper.

Ezike said that that under Section 243 of the 1999 Constitution as amended his client was an interested party in the suit.

Omehia, he said, was “a person, who is affected or likely to be affected by the outcome of any proceedings at the apex court’’. 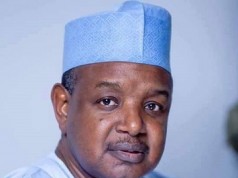