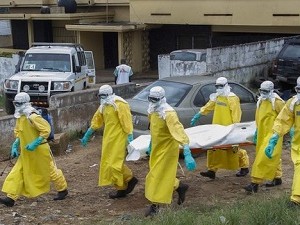 The United Nations mission in Liberia announced on Wednesday the first suspected victim among its employees of the deadly Ebola epidemic ravaging the impoverished west African nation.

Karin Landgren, head of UNMIL, told reporters in the capital Monrovia the worker, a Liberian man, had died last week of probable — but unconfirmed — Ebola infection.

“It is a sad reminder of the ever-present risk, and sobering for us as a mission and as the UN family,” she said, giving no further details on the staffer.

“UNMIL will continue to strengthen the measures we put in place to protect our staff, and to remind them to protect themselves and their families outside working hours.”
Liberia, the hardest-hit country in the outbreak, has seen almost 2,000 deaths, according to UNMIL, since it announced the outbreak had spread from Guinea on March 31.

Landgren said the mission had taken steps since then to educate personnel and help them protect themselves against the virus, describing staff safety as her “top priority”.

She described the outbreak as “Liberia’s gravest threat since the civil war”, referring to the back-to-back conflicts from 1989-2003 that left at least 250,000 people dead.

“Prices have risen, economic growth is expected to be cut by more than half, trade has reduced, many farmers are not tending their fields in affected areas, and children are not in school,” she said.

She reaffirmed UNMIL’s commitment to Liberia and said the mission would remain until at least the end of the year, with the Security Council considering an extension until October next year.
Landgren said she had travelled widely across Liberia in recent months and seen “considerable resilience, determination, and self-reliance”.

“Even as the number of new cases increases, some communities have made progress in changing behaviour and reducing transmission risks. This is an achievement,” she added.

Anthony Banbury, the head of the newly-formed UN Mission on Ebola Emergency Response, is due in Liberia on Thursday as part of three-nation introductory visit which will also take in Guinea and Sierra Leone.

Banbury said a priority for the Ghana-based mission would be “keeping its staff healthy and making sure that no one else is at risk of catching Ebola”, according to New York-based UN spokesman Stephane Dujarric.

AFCON: Ghana dumped out in one of Afcon’s greatest shocks